This month marks the fifth-year anniversary of Small Town Memories! We’ve been going strong since August 2014 when the first post, “Coffee Stir,” was published. Who knew that so much history — this is our 78th post — could be gathered for a blogsite that focused mostly on life in one small town during one short period in the mid-20th century! Many thanks to those who joined with us to preserve and share the history of Sharpsville, Pennsylvania, and its surrounding area.

Stories contributed by Eric Bombeck, this site’s co-editor, are helping to expand the time frame and geographical area of Small Town Memories to include the Shenango Valley, a place that the Shenango Valley Chamber of Commerce describes as “a charming tapestry of small cities, boroughs and townships.” Stay tuned for Eric’s next story.

NOTE: Posts that have been published in the past are sometimes updated or corrected, so remember to check back on your favorites from time to time to see if anything has changed or something new, such as a photo or comment, has been added. The latest additions are photographs of Reynolds Drive-In and the pavilion at Buhl Park as they look today, submitted by Mike Angel on a recent return visit to Sharpsville, his hometown. Also, a second advertisement for Mahaney’s Clothing Store, submitted by Eric Bombeck, has been included in last month’s blog, Part I of “The Two George Mahaneys.”

“Young” George F. Mahaney did not exactly follow in the footsteps of his father, “Old” George D. Mahaney, who was a well-known businessman and longtime Burgess of Sharpsville, Pennsylvania. Instead, Young George carved out his own notable path.

In a 1979 interview originally published in The Herald, George F. Mahaney, born in 1908, remembers details of life as it was in Sharpsville in his earliest days. This interview can be read in full in the November 2012 Newsletter for the Sharpsville Area Historical Society under “Reminiscences of George F. Mahaney Jr.” Among the various bits of Sharpsville’s history that Mahaney related are the following excerpts: 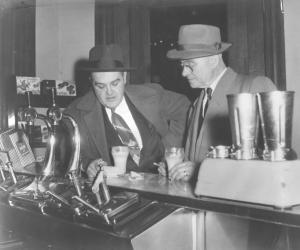 For the last 75-plus years, Sharpsville has had a special project that has set this small town off from most, maybe all, others. A day or two before Christmas Day, Santa Claus pays a visit to each Sharpsville child (whose porch light is turned on to beckon Santa). A great deal of preparation goes on beforehand so that Santa’s visit is as smooth as possible. All of this is accomplished by volunteers.

Much credit for this delightful tradition goes to George F. Mahaney and his friend Sid Owen. In the blog “Wall-to-Wall Santas in Sharpsville” on this site, Gail Nitch Hanes (SHS 1964) writes the following about the origins of Sharpsville’s Santa Project:

It all began in 1943 when George Mahaney Jr., a Sharpsville attorney, asked his friend Sid Owen to ”play Santa” for his children. Well, Sid was such a big hit with Mahaney’s children that he was asked by neighbors to drop in to visit their homes as well that night.

The following year, both he and George dressed in the red suits and visited even more homes. By 1947-48 there were so many homes and children to visit, Mr. Mahaney recruited members of the Sharpsville Service Club to assume ‘Santa duty,’ which began our town’s most beloved tradition. This year [2014] marks 71 consecutive years that Service Club members dressed in their red and white suits and, with the help of their special ‘elves,’ scattered throughout the Borough on December 23rd bringing smiles and the Christmas spirit to the children and their families. 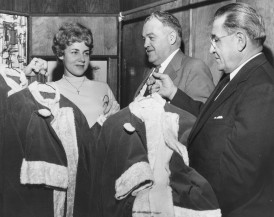 The photograph on the right was included in a newspaper article c. 1958 or 1959, with this caption:

“SHARPSVILLE CARRIES OUT 11th ANNUAL SANTA PROJECT. Twenty-one Santas and an equal number of ‘helpers’ will visit every child in Sharpsville, PA, on Christmas Eve. Miss Stacia Moore, employee of Sharpsville Dry Cleaners, takes the Santa uniform from storage for Atty. George Mahaney, chairman, (center) and Ralph Mehler [I], who is ready to serve as Santa for the 11th consecutive year. ….” (Unnamed newspaper, no date, possibly 1958 or 1959. Photo courtesy of Sharpsville Area Historical Society.)

George F. Mahaney: His Career As a Lawyer

Both George F. and his younger brother John “Jack” Knapp grew up to become lawyers. George Mahaney lived most of his life in Sharpsville and, as of the 1950s, his office was located in the Boyle Building, Sharon.

George Mahaney was a member of the Pennsylvania State Association of Boroughs (PSAB), a statewide organization founded in 1911 that served Pennsylvania’s borough governments, representing their interests and helping to shape their laws. Mahaney served as the president of PSAB from 1967 to 1968.

As president, his talk in March 1968 before the Ford City VFW indicated the direction he felt that boroughs should take. According to The Kittanning Paper, his suggestions included “more power for boroughs to enter into mergers, consolidations, adopting home rule charters, removing all existing debit limits, and permitting the legislature to adopt new debt ceilings.”

One Comment to “THE TWO GEORGE MAHANEYS Part II”