CONTI FAMILY: From Pofi to Sharpsville, Part I

You’re in for a special treat! This month’s guest writer, Gary Conti, shares with us a three-part story: Parts I and II tell of his Italian family, their immigration and life in Sharpsville as Italian-Americans. Finally, Part III describes a visit to the land where it all began.

Gary was born in 1963 and has been a lifelong Sharpsville resident. He grew up on South Second Street until he was 16 years old, and recalls the “good family friend Mary Caracci and her family who lived down the hill on North Second Street. I used to go there with my Aunt Theresa to visit Mary and accompany my aunt when she cleaned the offices of Cattron Communications.” After graduating from Sharpsville High School in 1981, Gary worked at Container Products and Howe Industries for about a total of 16 years. He is currently an employee of United Parcel Service (UPS).

Join Gary as he takes us on his grandparents’ journey from Pofi, Italy, to a new life in Sharpsville, a journey made by the many far-sighted and courageous people who came to America in the early years of the twentieth century.

Part I: From Pofi to Sharpsville

Ever since I was a small child, people would see or hear my last name and ask if I was related to this or that Conti. My answer was that I really did not know. Conti is a very well-known name throughout Italy. Now I have an answer: If they didn’t come from Pofi, Italy, and end up in Sharpsville, Pennsylvania, then we are not related. But it wasn’t until 2007 that I learned this answer.

One snowy January day in 2007 I sent an email that opened a treasure chest of facts that is still full to this day. I sent this email to a man named Tony who spent half the year in his hometown of Pofi, Italy, and the other six months in Toronto, Canada. He was putting together a reunion in Pofi of bloodlines around the world the very month we would be going there in October of 2007. I sent the email and, thinking I may never get a return reply, I left the room to make some coffee. When I came back to the computer, I found how wrong I was. I not only had a reply in minutes but one that told me I had hit the target. “Do you know the Scurpa’s?” he asked. Only all my life! In fact, I found out my grandmother was related to them.

The recipient of my email inspired me to learn how to research. He taught me how not to trust the years on the headstones of Italian graves. Because records in Italy were lost in wars, earthquakes, fires, and other calamities, the birth and death years on the headstones were mainly those that family members thought they knew. This derailed research he had done seven years before. He also introduced me to the Ellis Island Records website as well as telling me where to write in Pofi and what to say. Within a couple hours, I began hitting paydirt!

The only things I had going for me were the names of my grandparents who died decades before I was born, the name of the town and a few things my aunt taught me.

My Grandfather’s Path to Sharpsville

My grandfather was Luigi Conti, born in Pofi, Italy, in 1893 to Francesco and Francesa Giorgi Conti. He and five other men, ages 17 to the 40s, left their village in April of 1913 for Naples where they boarded a ship called The Prince of Piedmont. They made the trip across the ocean and arrived in New York on May 2nd. My grandfather and two others, a Scurpa and Luigi Gori, his best friend, headed to Sharpsville. They were following a path from towns south of Rome — Pofi, Castro dei Volsci, Ceccano, Ceprano and Falvaterra — that had already been made years before.

The men of the southern area of Italy were mostly farmers in what was known as “The Land That Fed Rome.” They and those farther south were forced to give a share of their crops to the Italian Government, which was then used to feed their own families who lived in the region to the north. To this day, this practice is not taken well by the southerners as it became, as a result, almost impossible for them to make a living. Somewhere along the line Sharpsville became known to the people of this area as a place where they could thrive and the push across the Atlantic to our town was on.

When my grandfather arrived in Sharpsville his petitioner was Luigi Gori’s older brother, Giacinto. Luigi went to work at the old Valley Mold & Iron which was at one time the largest ingot mold foundry in the world. He worked there for many years as a molder. 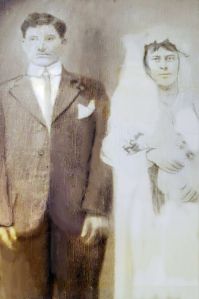 My grandmother was Mattia Recine Conti, the daughter of Giovanni and Carmine Vona Recine. She did not come to America until December of 1916 and her trip across the ocean was a bit of historical significance. Because World War I was in full force at the time, her ship, the Caserta, had big guns mounted on top. At certain points on the sea, the crew would engage in target practice for possible attacks by U-boats (German submarines). I could just imagine my grandmother’s reaction to that as a passenger!

My grandmother’s voyage was the Caserta’s last trip across the Atlantic, as the vessel company, out of safety concerns, stopped its operations until after the European Conflict.

I have gone over her ship manifest many times only to conclude that she made the trip across with strangers. It’s amazing to me how a woman could make that rough trip alone.

Mattia Recine arrived at Ellis Island in New York City a few days before Christmas of 1916 and, on New Year’s Day, she married my grandfather at St. Bartholomew Church in Sharpsville. I have never found out if they knew each other back in Pofi and always wondered if the Scurpa’s had something to do with the marriage. The only clue I found was a couple of years before she came to America, my grandfather was living at Alice Row*, with another man whose last name was also Recine.

(*Alice Row was a group of Valley Mold row houses located off North Mercer Avenue on Cedar Street in Sharpsville. “Alice” was the name of a furnace at Valley Mold. The building no longer stands and the site is now used by a dealership to store used cars.)

My grandparents’ first child, Sebastian (known to the family as “Sub”), was born in 1918. He was followed a year to the day afterward by Theresa, then Mary, Rosa, my father Frank (left photo) and then Tony. Even though they were born here they spoke little English when they started school.

I came to learn over the years that my grandfather Luigi was a no-nonsense guy who ruled in the old-school way: Punish first then move on. Do what you are told and stay away from his garden! My Aunt Theresa used to tell me how he would sit on the porch at night with a radio and a bottle of homemade “Dago Red” and claim that he could hear Rome on the radio. Anybody who has ever had that homemade wine knows that hearing Rome from Sharpsville after a couple of drinks is possible! Besides the wine he was known for working in that garden, ruling the home and smoking those little Italian cigars that he would always send the kids to get for him. 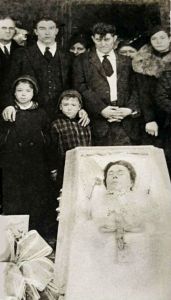 Funeral for my grandmother Mattia Recine Conti, c. 1937. The children in front are my father and Uncle Tony Conti.

At a very early age, my aunts and uncles lost their mother, my grandmother, (in c. 1937) and their father (in 1945). My father was 9 and my Uncle Tony 7 when their mother died. I never knew a lot about her other than she was good with the kids and kind with many friends in the Italian community of Sharpsville, as you could see in the photo by her casket. My Aunt Theresa and Uncle Sub had some of their teenage years taken away and quickly became very close as brother and sister.

Uncle Sub was the first of my father’s siblings to move away from his childhood home. He found work in the iron mill and married Mary Josephine Sabella in 1937. They lived on Seventh Street just above where Rossi Barber Shop was.

Later, Uncle Sub moved back to Cedar Street when he took my father in. My father told me many times that the Seventh Street house was where he had his first Thanksgiving dinner. I guess Italians did not take part in that tradition early on.

My Uncle Tony is another one for the record books. Because of very poor health as a child, he was not expected to live past teenage years. They found a hole in his heart on a checkup right on the front lines during the Korean War and he was sent to Japan and then home. He later had the first successful open heart surgery in Cleveland. He will soon be 88.

What I learned from Magdalena Scurpa

Magdalena Scurpa, who was related to my grandmother, took my aunt Theresa under her wing and made sure the connection to Italy lived on. As a young kid many years later I would sit at my aunt’s kitchen table listening to her stories as she made sauce, bread and pizzelle (traditional Italian waffle cookies), as well as fried dough. Man, do I miss that stuff!

She would tell me how the Italians feared The Black Hand, a name given to an Italian organized crime group that blackmailed Italian business owners and struck fear into Italians. It mostly operated before Prohibition and, yes, even in Sharpsville, Sharon and Farrell. It was known around the country and it really took hold in Hillsville near New Castle.

She told me of the time the Ku Klux Klan burned a cross on the hill above the town of South Pymatuning because all immigrants and African Americans lived in the old neighborhood at the lower end and that cross was in clear view. The story I hear, though, is that the Klan members didn’t stick around after starting it! 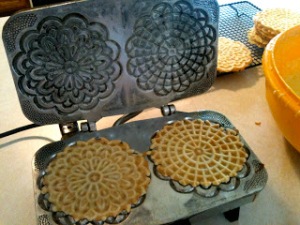 Growing up and hearing family stories made me feel like I was a part of it all. It was and still is special to me. I have never forgotten where my bloodlines came from and their struggles.

[Right] A pizzelle press in action. Source: Photo by (and courtesy of) Jacquelyn Stager, author of “Life Between the Buns: Pizzelles Anyone?”, a blog that includes a recipe for pizzelles. (Accessed 2018-10-20).

Next month: The Conti Family, Part II: An Italian-American Christmas, A Golden Childhood.

7 Comments to “CONTI FAMILY: From Pofi to Sharpsville, Part I”