We made it! That is, most of us did. This year we commemorate our 60th anniversary of the Sharpsville (PA) High School Class of 1958. Many high school classes have come and gone, but the Class of 1958 is special to us because it is our class, consisting of students (103 graduates) who had studied and played together for some or all of the 12 years from first grade to senior high school. Whether we stayed in town or left for distant places, highlights of those times seem to have been etched in our minds to be remembered for the rest of our lives.

Ours was the generation whose teen years spanned the 1950s, a decade that began with the Korean War, endured the Cold War and ended during the early years of the Vietnam War. We started with U.S. President Harry S Truman and ended with Dwight D. Eisenhower. The Space Race began when the Soviet’s Sputnik I was the first artificial satellite to orbit the earth (1957), spurring our country’s focus on science education. The 1950s featured the development of portable transistor radios (1954), the first solar batteries (1954), Jonas Salk polio vaccine (1955), the first plastic soft drink bottles (1958), passenger jets entering service, the growth of television and the first transcontinental TV service. And at the end of the decade, Alaska and Hawaii attained statehood (1959).

While all of this and much more was happening in the “outside” world, our concerns were more close to home. Growing prosperity in the 1950s meant that young people did not have to become full-fledged adults as quickly as in earlier times. Enter teen “rebels without a cause,” an age group that became a distinct entity with desires for their own styles. Teenage trends of the 1950s were picked up quickly by the fashion and music industries and are well-known to this day.

During this era teens in our small town were not left behind. At school or anywhere else, one could easily find guys wearing slicked-back ducktail haircuts, rolled-up short-sleeved shirts and “pegged” jeans and girls in mid-thigh-length slim skirts or colorful gathered skirts or dresses with cinched-in waists. Rock-and-roll music was everywhere, playing on our car radios, on jukeboxes and live at record hops and proms.

Sure, there were times when we acted up and gave teachers grief. I remember our frustrated math teacher hurling a blackboard eraser at an unruly student and an English teacher brought to tears after trying unsuccessfully to interest the class in Shakespearean sonnets. (Credit must be given to the several thoughtful classmates who apologized after class to the teacher on behalf of the miscreants).

But Sharpsville High School students during the ’50s were relatively well-behaved, compared to the troubles seen at many schools today. While we may have been reprimanded for talking in class, chewing gum, running in the halls, wearing “improper” clothing, smoking in the restrooms and littering, such misbehavior doesn’t come close in seriousness to today’s school problems of drug and alcohol abuse, suicides, and shootings.

The “Devil’s Log” yearbooks show that we were busy enough during school days with not only our regular classes but a variety of extra-curricular activities.

There was the National Honor Society in which juniors (15% of their class in 1958) and seniors (10% of our class) that focused on scholarship, service and character. Juniors and seniors who were enrolled in commercial subjects could belong to the Commercial Club, which worked to develop business leadership. One could volunteer to assist in the library and a few guys who set up equipment for movies, concerts, record hops, rallies and lighting for plays formed the Projectionists’ Club. The girls who belonged to the Future Homemakers of America learned to cook, sew and “anything that will help them when they get married.”

There were also the Latin and French Clubs, if you were studying those subjects. (Spanish was also studied at SHS for which there was no club, but I remember related activities, such as trying out our foreign language skills with the Spanish version of Scrabble every Friday.)

Homecoming in the fall of 1957 (and the spring 1958 prom) featured Pigskin Queen Dawn Grove and attendants Connie Rodocoy and Connie Falvo. “They reigned over the Homecoming football game in which the SHS Blue Devils fought gallantly but lost to Meadville,” even though the Varsity Cheerleaders did their best. There was Varsity “S” in which members held an “initiation” each December for any that earned a letter in sports that year. The hapless initiates were required to “dress in feminine clothes and parade through town and do odd jobs to raise funds for…the evening banquet.”

And there was much more: Sports teams that played basketball, baseball or golf (boys only); Devil’s Log staff, Blue and White staff (yes, SHS had a small newspaper, produced by SHS’s top-ranking journalism students), and the Quill and Scroll journalists’ society. The Thespian Society was a select group interested in promoting the dramatic arts, such as our junior class play “Onions in the Stew” and senior class play, “Home Sweet Homicide.” The SHS marching band was complete with majorettes and a color guard.

Our school also had an orchestra and even a swing band. And, even though I wasn’t much of a singer, I particularly enjoyed belonging to the very large A Cappella Choir. Their annual Christmas and Spring concerts were beautiful to see and hear.

We owe many thanks to the diligence and dedication of the teachers and coaches who directed us in these activities. They recognized the educational and social values of these varied organizations and they believed in our potential.

SHS CLASS OF 1958: Our Lives After High School

As the “Devil’s Log” yearbooks are a record of our school history, so were the reunion brochures a rich history of our class since graduation, with a bit of genealogy information thrown in as well. 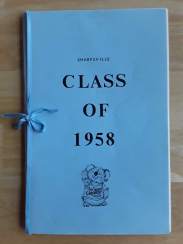 According to a tally of the 1988 reunion brochure (our 30th year since graduation), 47 of those who provided information were living in Pennsylvania (18 of which lived in Sharpsville), and the rest were scattered about in 18 different states and a U.S. territory (Virgin Islands). Most of our former classmates living outside PA were in Ohio (15), Florida (6), Arizona (4) and California (4). Almost all were parents of 1 to 5 children (plus stepchildren in 2 cases) and some were grandparents. 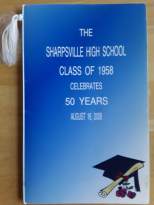 By the time our 50th-year anniversary rolled around in 2008, 43 reported that they were retired, many were enjoying grandchildren, and a few (9) had great-grandchildren.

Much appreciation goes to Betty Zreliak (Ealy), Allegra Dungan (Colapietro), their committee members and all the others who worked on our class reunions, keeping us together for 60 years.

As stated in the 2003 reunion brochure, “We were a unique high school class; our generation was special; our memories are precious.” 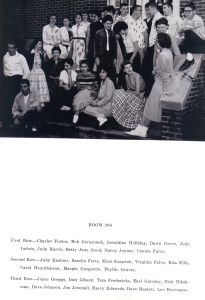 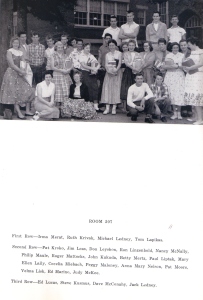 Our latest milestone was celebrated in July 2018 during a weekend of get-togethers by 27 alumni, as described by James Jovenall, President of the Class of 1958:

The 60th-anniversary reunion of the Sharpsville High School class of 1958 was held on July 14 at DiLorenzo’s Restaurant in Sharpsville. In attendance were 27 classmates and 13 spouses. An icebreaker was held on Friday evening prior to the reunion at Muscarella’s Italian Restaurant.

Jim Jovenall, class president, welcomed everyone and thanked the reunion committee for all their time and effort to bring this to fruition. The committee consisted of Allegra Dungan Colapietro, Sandra Combine Joseph, Sue Cusick Miller, and Anna Mary Nelson Patton. Also noted were donations by Stanley Alfredo, Anna Mary and Tom Patton, Judy Imbrie Bender, and Sue Miller. The invocation was given by Jim Leas followed by dinner.

After dinner, Jovenall asked if any classmates had any memories of their high school days that they would like to share. This prompted some hilarious comments about the class trip to Washington, D. C., class day water balloon incidents, and our class walkout in our junior year.

Jovenall pointed out that 5 of our classmates came a considerable distance to be with us. He also pointed out that Ann Angel has a blog called “Small Town Memories.” Great reading about places and events that Ann recalls from growing up here.

An invitation was extended to everyone to attend the Monday morning coffee hour, 10 am at DiLorenzo’s.

In closing, Jovenall thanked all for attending and looks forward to seeing everyone in five years. All in all, it was an enjoyable weekend.

According to our reunion brochures, the following are those who have left us: